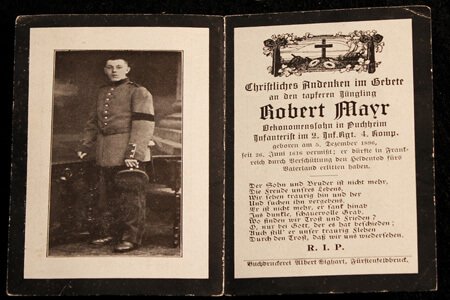 Death pictures, or also death notes, are pieces of paper with important life data of a deceased. It dates from the 17th century and the oldest is from 1672 of Würzburg.

Since the eighteenth century one often finds on the burial pages, the whole life of a deceased. Important events and quotations from religion are mentioned.

In the nineteenth century, the death images spread to the whole of Catholic Europe, as in 1842 in Bavaria. It is estimated that the images have been printed since the beginning of the First World War. Apart from soldiers who have fallen dead, soldiers of the deceased are only generally familiar from 1970 onwards.

Collection from all over the world

From the area of ​​Tyrol

News of the category death pictures