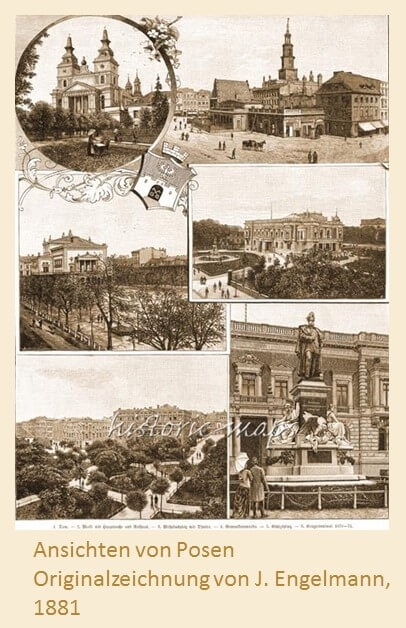 G rand Duchy of Poznan identical to the province of Poznan was from 1815-1920 a province of the State of Prussia. From 1848 to 1851 this province belonged partly to the German Confederation and in 1867 to the North German Confederation.
From 1871 the province belonged to the German Empire. The Polish government expropriated many local Germans who were not granted Polish citizenship.
After the Polish campaign, National Socialist Germany appropriated the Poznan Voivodeship and formed the Reichsgau-Wartheland with Poznan as its capital together with other Polish territories. The area around Bydgoszcz was assigned to Reichsgau-Danzig-Westpreußen.
The former province of Posen was returned to Poland in 1945 and the German minority was expelled.

Bromberg and its suburbs

Address book for the city and the police district Bromberg 1864